“Birth place of the Cessna 172 Skyhawk”

The Kingman airport has recently undergone major improvements and is the winner in the Reliever & General Aviation Airports category of the 2002 National Pavement Awards Program for Excellence in Concrete Pavement.

Businesses on the airfield

Prairie Wind Aviation is a full-service aviation shop, with overnight storage available. Contact at (620) 755-4440 or email at olson@prairiewindaviation.com. 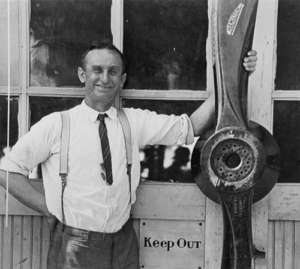 On Sunday morning, 12 June 1955, Cessna Aircraft Company test pilot Emil Brown (“Fritz”) Feutz, took off from Cessna Aircraft Field (CEA), southeast of Wichita, Kansas, with the new prototype Model 172, N41678, and flew west to a grass runway near Kingman, Kansas, approximately 48 miles (78 kilometers) to the west. Also on board was an observer, D.G. Underwood. The airplane was stored in a small hangar in Kingman while Feutz conducted the flight and certification testing.

N41678, serial number 612, was originally a prototype for the Model 170C “tail-dragger.” It featured new, straight tail surfaces in place of the classic rounded style. The airplane was then modified with tricycle-configuration landing gear. With the airplane in a horizontal attitude, the pilot had better visibility while on the ground, and taxiing, takeoff and landing were much easier. Flight testing showed that the increased drag slowed the 172 by about 5 miles per hour (8 kilometers per hour) when compared to the 170.

After considerable flight testing at Kingman Kansas, the Civil Aeronautics Administration (predecessor to the Federal Aviation Administration) approved the airplane’s type certificate, 3A12, on 4 November 1955. 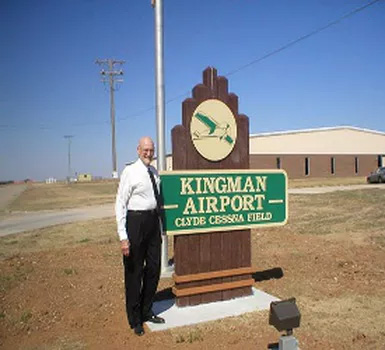 The Cessna 172 was an immediate success. Cessna’s marketing department dubbed the 172 the “land-o-matic” because it was so easy to fly and land, and 1,174 were quickly produced in 1956 with a price tag of $8,995. Compare those production numbers to the Cessna Citation X, the world’s fastest business jet, at a total of 338 aircraft built from 1996 to 2018.

During the 1960s, Cessna began marketing the airplane with the name Skyhawk. And though everyone knows the Cessna 172 as the ‘Skyhawk’ today, that name didn’t come into use until late 1960. Cessna was prepping the 1961 model, the 172B, and aspired to offer a ‘deluxe’ option that would include enhanced avionics and full exterior paint instead of the standard partial paint stripes previously produced. The 172 was in production from 1956 until 1986, when product liability lawsuits made the cost of the airplane unaffordable. Production resumed in 1996 and continues today. More than 60,000 have been built in at least 27 variants by Cessna and its licensee, Reims Aviation Industries, in France. This is greater than any other aircraft type produced in the world.